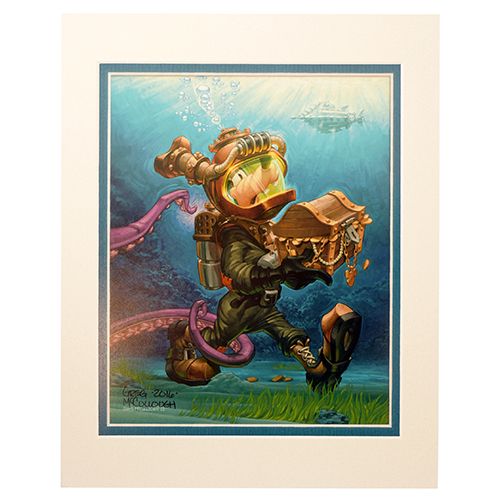 The Adventure of a Lifetime

The story begins with a mystery: giant ships in the Pacific Ocean are being attacked by … a sea monster! Professor Pierre Aronnax, his nervous assistant Conseil, and headstrong sailor Ned Land set sail on a US Navy frigate to find out if this monster exists. After a disastrous encounter with the mysterious force, the trio discovers (as we already know) that this is no monster, but an incredible new type of ship called the submarine. They also meet the equally unusual Captain Nemo, a man of great genius and passion who quickly divides the castaways: Aronnax wants to learn more, while the others want to escape.

The movie is largely anchored by its all-star cast — the first such ensemble in a live-action Disney film and something they strive for even today. Paul Lukas, who won the Oscar for Best Actor ten years earlier, does a good enough job with Aronnax. However, much of his performance involves bouncing off the other main characters, whose strong personalities overshadow the professor. Horror icon Peter Lorre went against type, portraying a timid fellow with a sense of humor. Of the three castaways, Kirk Douglas steals the show as the bold and brash Ned, who picks fights, rebels against orders, and takes the most action out of the group.

However, the real draw of the movie is James Mason’s spellbinding turn as the enigmatic Captain Nemo. He is brilliant, commanding, and sympathetic in his anti-imperialist cause. He is also harsh, cruel, and temperamental, keeping the castaways prisoner and slaughtering his enemies with little remorse. Despite this, his charisma is overpowering, not just to Aronnax but also the audience. Whether he’s launching a cold-blooded attack on an enemy ship, playing Bach on his organ, or relating the unusual ingredients for his marine versions of traditional meals, Nemo is fascinating to watch.

The performances by the cast may be fantastic, but they are hardly the film’s only draw. 20,000 Leagues Under the Sea is absolutely a sci-fi spectacle, with special effects and production design that remain eye-popping and amazing. The jagged copper exterior design of the Nautilus is considered not just iconic but definitive. Some consider it, as well as the strange technology of the interior, to be early examples of steampunk. The scenes where the crew don old-time diving suits and explore the ocean depths are some of the film’s most imaginative, depicting how one might actually get all their needs from the sea.

We cannot discuss this movie’s special effects without describing the giant squid battle. In a time before computers, Walt Disney Productions managed to stage an impressive and exciting clash between Nemo’s sailors and a true sea monster using only practical effects. The nighttime setting and stormy weather were chosen to hide the strings holding the killer tentacles, but they contribute to the truly nightmarish atmosphere. Of the movie’s many thrilling action sequences, this is the most purely entertaining.

“The Mightiest Motion Picture of Them All”

20,000 Leagues has it all: stellar acting, electrifying action, inspiring visuals, excellent special effects, and great imagination. This ambitious project nearly bankrupted the studio, but it paid off remarkably with great box office returns and two Oscars for the film’s technical achievements. Even now, more than 60 years later, the movie is beloved by many and considered a triumph. 20,000 Leagues is not just a great adventure movie, or a great sci-fi movie, or even a great Disney movie. It’s among the best Hollywood films ever made.

If you’re in deep with your love for Disney’s version of 20,000 Leagues, Your WDW Store has a wide range of great gifts themed to the movie and the theme park attractions based on it. Dive into our inventory and check out the treasures we have in store.