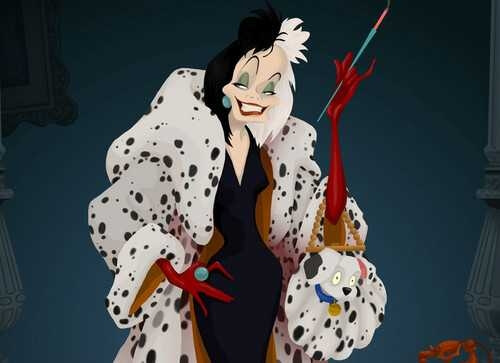 Welcome to Your WDW Store's Disney Villain Spotlight, in which we discuss all the most wicked Disney characters you love to hate and hate to love! In this edition, we're focusing on Cruella De Vil, a fashionable aristocrat whose love of furs goes way too far. Her desire for a spotted fur coat leads her to capture Pongo and Perdita’s fifteen puppies in the Disney classic One Hundred and One Dalmatians, originally released January 25, 1961. Cruella goes to extreme lengths to recover the puppies when they escape — bringing the 80 or so puppies she’d already collected with them — but proves to be her own worst enemy!

Cruella later appeared in 101 Dalmatians and 102 Dalmatians, the live-action remake and sequel in which she was portrayed by Glenn Close. The character has also appeared in video games and other Disney series, and is set to have her own movie later this year. And while Cruella certainly lives up to her name, she remains a popular villain to this day, mostly because of her over-the-top attitude and striking personal style. Cruella is a favorite of fans who appreciate her penchant for the finer things in life, her extreme determination, and the fact that she won't take any back-talk from anybody! Of course, even her fans love seeing her get what she deserves at the end of the films when all her plans go to the dogs… pun intended.

At Your WDW Store, we're all about Disney and that includes the villains as well as the heroes! We have tons of great Cruella De Vil merchandise, all of which is exclusively sold only at Disney theme parks. Our collection includes shirts and bags, pins, hair ties, and makeup kits for those who want to let a little of their inner De Vil out!

If you're totally unapproachable in the morning, what better way to say it than with a Cruella coffee mug? Believe it or not, she has a softer side, too… but only when she's a Disney Baby Plush or a Tsum Tsum. No matter your mood (or your favorite character), Your WDW Store is the place to find something unique that you could otherwise only get at the Disney parks!