It's Time to Ditch the Screens and Play Some Disney Games Together! 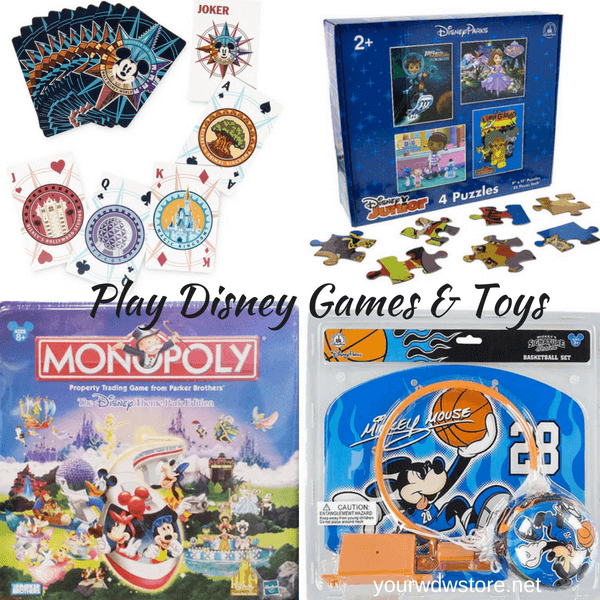 Ditch the Screens to Play Some Disney Games!

There's been a huge debate raging in the past two years about "screen time" — how much time children (and adults too, to an extent) should spend on digital devices. Teachers, psychologists, and doctors all seem to agree that spending too much time staring at a screen is detrimental. Unfortunately, it's not always easy to get kids (or adults; admit it!) to limit their screen time, but we have something that might help: Disney games!

At Your WDW Store, we have some of the best Disney toys and games that are extra special because they're otherwise only available from Walt Disney World, Disneyland, and the related theme parks. Playing with these games is not only fun, it brings that special magic of Disney right into your home! Let's look at some of the ways you and your kids can have a great Disney time together.

Why not play a kid-friendly card game the Disney way? Crazy Eights, Go Fish, War, and other classic card games are easy for kids to understand and are ten times as fun when you have Disney World playing cards. We also have a double deck set of Star Wars playing cards, which includes an Imperial deck and a Rebel deck. Check out all our Disney playing cards and you'll find decks with various themes including Pirates of the Caribbean, Disney cruises, Mickey and Pals, SpongeBob, and more. We have over 200 different decks and some are dual packs!

We also have classic board games given the Disney treatment, like Clue – Tower of Terror Edition, Haunted Mansion Game of Life, and several variations of Disney Monopoly! Even familiar games become new again when they're charged up with a Disney theme. We also have Harry Potter Wizard Chess and the Golden Snitch Quidditch Game as well as its Expansion Pack.

Want to do something less competitive? Why not do a puzzle together! We have over 100 Disney puzzles with different numbers of pieces to make them suitable for all ages. It's so much fun to figure out where each piece goes, one by one, and watch an amazing picture slowly take shape on the table in front of you. And speaking of which, we also have Disney model kits, which are less "puzzling" but even more satisfying to put together.

Go outside and play!

How about getting more active? Play some Disney sports! Basketball, football, baseball, bowling, soccer and more are all available in kid-friendly Disney versions. Or maybe just start some Jedi Lightsaber Training instead! And when you and your kids are worn out from playing and want to give your brains a turn at exercising, a Mickey and Friends Rubik's Cube is a great Disney take on a classic mind puzzle.

With all these awesome Disney games and toys available, there's no reason you and your kids should be stuck in front of screens all day. The real world can be even more fun than video games and apps, especially when you have your favorite characters along for the ride. You might find that your kids look forward to "real-life play time" even more than their consoles and tablets. The key is to make it magical!